“On this most holy days of days” as the hymn Ye Sons and Daughters states, our hearts should be full of joy. For Christians, Easter Sunday of the Lord’s Resurrection is the most important day of the whole year. It is the day when we recall the most important words ever spoken in the history of the world, from the first moment of time until last: He is risen. He is not here. Perhaps some, even among the Christian faithful, might find these words a little over-dramatized, yet I would beg to differ because, when we really consider this moment in context, words simply fail to capture this epic moment.

You see, from all eternity, it was the will of God to freely create a world which would manifest the manifold glory and goodness of the Most Holy Trinity. Among those creatures, man holds a unique place – in one sense, a pinnacle. Not only does he act in some ways “automatically” as it were or according to the fixed laws of nature, but beyond that, he has the capacity to know and reflect upon the mystery of creation and of all existence, of which he is a part. Further, he has been endowed by his Creator with a will to choose to serve God and his fellow man in generosity and love. These primordial gifts of knowledge and love are reason enough to be eternally grateful to Almighty God.

Our first parents, Adam and Eve, however, chose to use those primordial gifts in a way that did not serve for the glory and goodness of God or the service of their fellow man. As the Catechism summarizes it, “Man, tempted by the devil, let his trust in his Creator die in his heart and, abusing his freedom, disobeyed God’s command. This is what man’s first sin consisted of. All subsequent sin would be disobedience toward God and lack of trust in His goodness.” (CCC, 397) In the knowledge and freedom which Adam and Eve possessed, they held their own plans to be better than those of God’s. They turned their wills to their own misguided design instead of that most perfect and loving design of the Eternal Father. They disobeyed a will and a plan which would have aided them in living in a way pleasing to their Father, in accord to their God-given dignity, and in such manner as would have led them to perfect happiness. They thought their own pathetic plan might be better.

From Adam to Christ (and, sadly, beyond), the whole long story of mankind is a repetition of that foolish choice by our first parents. As the Catechism states, all sin is “disobedience toward God” and “a lack of trust in His goodness.” When we look at it that way, the problem of our sin perhaps becomes more simple. It’s our wills versus God’s Will, and we so often foolish choose our own over and against His. Even the best individuals in the Old Testament attempted to follow God’s will: Noah, Abraham, Jacob (Israel), Moses, and David. Yet, in all their lives, they experienced moments of failure and ultimately were unable to live that life to which we were all originally called. We would be no better than they because it’s not a matter of the task being too difficult for some. It’s a matter of the task being impossible for all. It simply is not possible for finite creatures to make amends for an offense against the Infinite God, Who is infinitely, perfectly good.

Enter: Jesus Christ. In the solemnity of the Annunciation (March 25) and Christmas, we recall that moment when the Second Person of the Most Holy Trinity joined a human nature to His Divine Nature in the womb of the Virgin Mary and was born in a stable in Bethlehem. The angels trembled because the All-Holy God so humbled Himself as to become as one of His lowly creatures. He began the process of reuniting man to Himself and healing the broken wills of men and women that they might once again be able to be obedient to the Father as we were once called to do. St. Paul puts it so succinctly in his letter to the Philippians: “…he emptied himself, taking the form of a slave, coming in human likeness; and found human in appearance, he humbled himself, becoming obedient to death, even death on a cross.” (Phil2:7-8).

The obedience to the Divine Will, which Adam failed to observe, was observed by God the Son, who is also the Son of Mary and the Son of Adam. That observance more than made up for the failings on the part of all of mankind for it was an observance from the first breath of His life until the last by One who is Infinite. Therefore, the effects of that obedience were infinite. The evil one, trying to entice our Lord into disobedience as he had already done to all others since Adam, failed with Christ, for he couldn’t conceive in a million years that he could be contending with His Creator, yet he was! 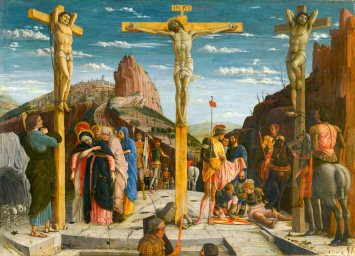 Even as Christ hung nailed to the cross, He was completely free! The evil one could break His Body, but he couldn’t break His Will which was dead-set, pun intended, on obedience to the Father’s Will even unto death! The evil one lost because here was a man, Who was also God, and Who could be perfectly obedient to the Father; He couldn’t be manipulated by the evil one. In this is the ultimate victory of God and of mankind.

For this total obedience, the Father restored life to His Son, for it would be unfitting for One who had not turned against His Father’s Will even once in His life to endure the penalty incurred by the disobedience of sin. Therefore, He came back to life, but not just another life in this world which would die at some point again in the future. Rather, the Lord was given a life that would never end, a life not subject to evil, sin/disobedience, or death, the ultimate penalty of sin. His life is the Life once promised to Adam and Eve, an eternal life not subject to change or decay or death. 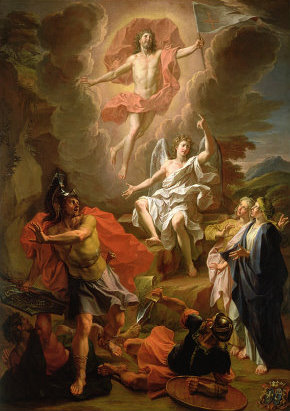 Now, as St. Paul told the Romans (6:4), “We were indeed buried with him through baptism into death, so that, just as Christ was raised from the dead by the glory of the Father, we too might live in newness of life.” We have been joined to Him in His obedience-unto-death in a sacramental way and have been given new life in Christ, although it is hidden (Col 3:3). Therefore, we have the very life of Christ within us, that same life by which Christ rose again from the dead, nevermore to die! Our task is to persist in that life even unto death. We are to adhere to the will of the Father, loving Him above all things and loving our neighbor as God has loved us. Should we do that, we will enjoy the same glory which our Lord Jesus Christ, the sole Victor over sin and death, even now enjoys at the right hand of the Father.

Yet, neither this new life of grace and obedience nor the eternal glories of the Father’s home would be possible were it not for the singular moment of the Resurrection. As the Church proclaimed in the Easter Proclamation last night at the Vigil: our (natural) birth would have been no gain had we not been redeemed. The Church, therefore, sings to our Heavenly Father with joy: O wonder of Your humble care for us! O love, O charity beyond all telling, to ransom a slave You gave away Your Son! O truly necessary sin of Adam, destroyed completely by the Death of Christ! O happy fault that earned so great, so glorious a Redeemer! Yes, Easter Sunday of the Lord’s Resurrection is the “most holy days of days” and the most important day of the year, and our hearts should be overflowing with joy and gratitude for the unflagging, sacrificial love of the Most Holy Trinity. It is not a joy that necessarily manifests itself in smiles or outward shows exuberance. Rather, it is a joy that is profound and that endures through good times and bad. It is a joy that perdures because it is founded on the hope that, even now, we share life in Him Who died, but Who now lives forever! Yes, that is epic! 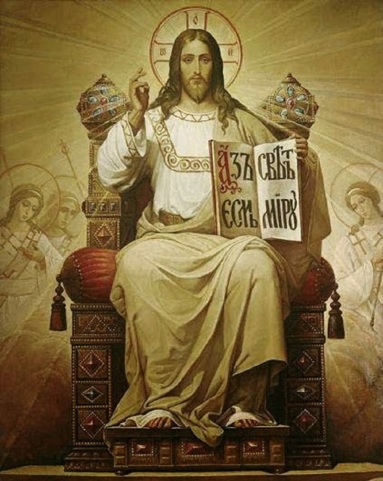 A priest of the Diocese of Lincoln, NE, I am studying philosophy in Rome, Italy. My hope and prayer is to offer some interesting, edifying, and just plain fun anecdotes about Rome, philosophy, the Faith, and whatever/whoever else I happen to encounter on this little daily adventure.

things seen and spoken of…